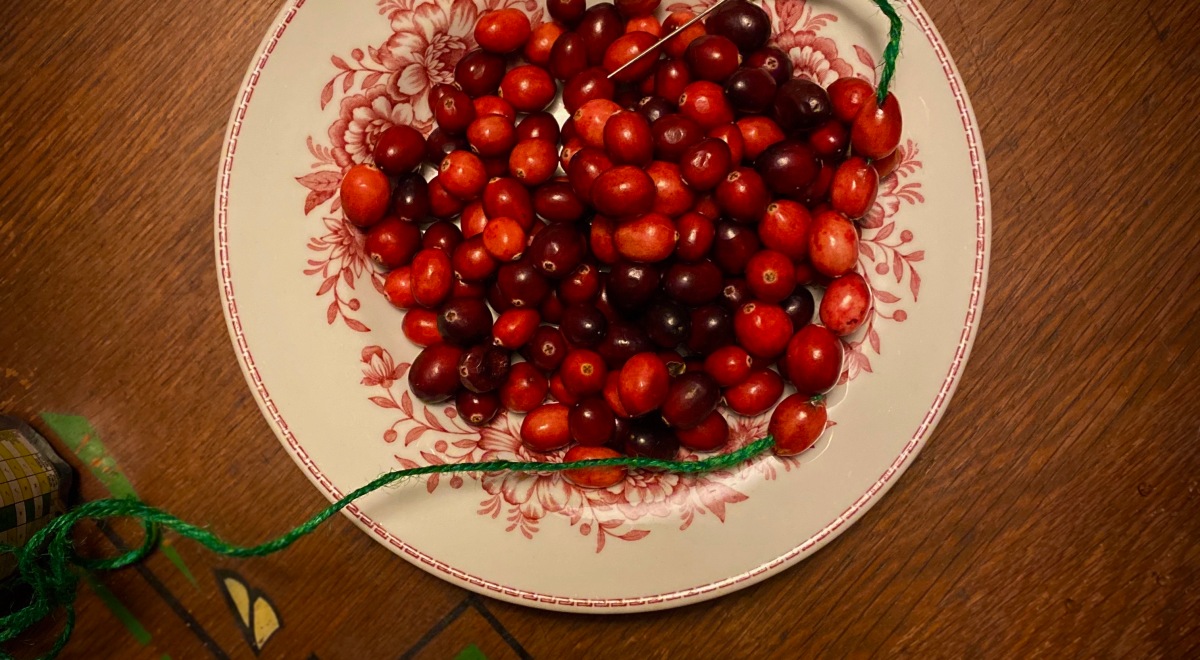 Greetings! I’m back with what I’m going to admit was a bit of a crafting failure: the cranberry garland.

What could be more beautiful, I thought, than a garland of gloriously plump cranberries nestled in the branches of a Christmas tree? As I poured the bag of berries into a bowl, I marvelled at the thrilling complexity of colour variation that could only be found in nature.

I decided to string them up with some lovely green jute–which, in retrospect, was really too thick for the job and kinda juiced the cranberries. The ones I strung later on dental floss seemed to fare better. Again, I used a couching needle (large enough for the jute). I quickly realised that it works best to string smaller segments and then join them together to make one long garland at the end.

But. I really jumped the gun on this one, stringing up my little berries in the first week of December.

When the Christmas brain fog lifted and it dawned on me that my that lil nuggets were going to rot, I again turned to the internet hoping to discover the elixir of life for craft fruit. The internet told me that I need to spray them with a sealant. So I went out looking for said sealant…. which apparently isn’t sold in stores because the kids are huffing it or something. So I grabbed some trusty ole Mod Podge hoping that would do the trick.

I painted on two coats of this stuff and then left them to dry overnight.

Oh my goodness, they looked so gorgeous and shiny with their brand new glossy gloss! Had I defied the gods of mold and rot?

Even Jane could not resist my little beautiful beacons of Christmassy joy.

So I placed my preciouses in the tree and hoped for the best.

A mere two days later, my tree was adorned with cranberries shrivelling in their little gloss pods.

So, I guess the conclusion of this saga is… don’t make your cranberry garlands until the 23rd of December? But like, what is the point of that? Or just become a cranberry factory, constantly churning out and rotating fresh garlands?

After my failure, I made a small garland with the remaining berries and the aforementioned dental floss and put it out on the balcony in hopes that the frigid air would do them some good.

It seems to have done the trick: a week later and those cranberries are in need of no botox.