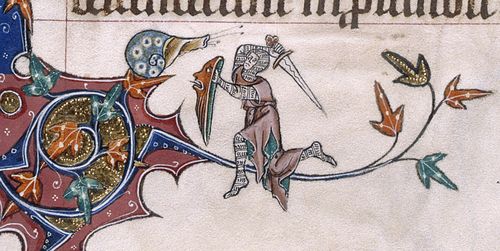 Holy effing sheetz, it is only Tuesday.

Not that I’m like dying for life to fly by at this point… I just wish that the weekdays didn’t drag on for 15 years while the weekend lasts only 15 minutes (tops).

Lately, I’ve been been documenting this slow passage of weekday-time by drawing snails on my Wednesday bullet journal entries. Following a month of this personal trend, justhistoryposts happened to write a blog about medieval snail marginalia week before last, of all things! As he/she/it (I think she’s a she, I’m pretty sure, let’s go with that) did a great job of cogently breaking down this subject (linked above), I’m just going to give you a lazy Weekesian summary, paired with a sound (crazy), in-depth (shallow) analysis (opinion) of some of these illustrations.

So, basically, if you’re a medievalist, you’ve probably noticed that illuminated texts from 12-15th centuries are rife with snail imagery–specifically, snails battling knights. I’m a victorianist, not a medievalist, so I haven’t noticed this. Until now! And omg I luuuuuuuv them!

Apparently, no one knows for sure what these illustrations mean, but that hasn’t stopped hundreds of years of speculation. Here are some of the theories…

In 1850, some bloke named Comte de Bastard (actual name) surmised that the snail was a symbol for the Resurrection in these texts. I don’t really get/buy this one, so I’m not going to spend any time trying to understand why Bastard drew this tenuous parallel.

Some peeps (scholars) liken the snail vs knight dynamic to the poor vs rich. I like this idea, but I wonder if it is misapplying our modern sense of social justice to the Middles Ages. Other peeps have suggested that the snails are social climbers, attempting to infiltrate the nobility with their lowly and slimy ways. This maybe seems a more likely fear to symbolise.

I also like the idea of snails being the enemy of the garden-grooming monks/artists of these illuminated texts. It makes sense that the monks would be keen to depict their greatest pest terrorising a knight.

Which brings me to the last and most likely (opinion) conclusion: the snails, they be but a joke. Like, maybe one guy drew that funny little cartoon first and then the guy next to him was like, ‘That’s a neat idea!’ and drew another funny little doodle and on and on it went through the years until it finally just became, like, a thing? Because, I mean, it is a funny notion–a great knight cowering before a lowly snail.

What do y’all think? Any other theories?

This Weekes Word sounds like it relates to snails (mollusks) but…… it doesn’t!

Mulct: from the Latin mulcta, abbreviated to mulct in the 15th century and meaning a fine or penalty. Ex: The monk demanded a mulct from the mollusk who meandered across his memorandum.

Title courtesy of Jeff at ugh@requirements.com